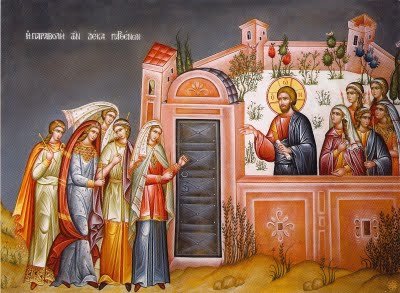 We are moving towards the end of the liturgical year and it’s only normal that we face the topic of the end of the world and the coming of “Jesus to judge the living and the dead.” Contrasting images make this reality more vivid: wedding celebration and a door shut, brightly burning torches and dim lamps. Lifelike, these images reveal to me not only an eternal condition but also a choice I am given: the light does not go out suddenly but as a result of a choice the foolish maiden made. Then, from the start I have to ask myself which group do I want to join, how am I going to live me life? In darkness, with a half-lit lamp or in the brightness of full torch? The dominant image of the Kingdom is found in the maidens. The kingdom is like them….
“Here’s the Bridegroom!” I like to think of this image. My life is a response to this cry, the bridegroom, whom I have been waiting, is coming. This is a powerful image for me: life as “going out, moving to encounter Someone who comes for me.” Whose voice is it?
I am surprised, though; I do not associate wedding celebrations with sleeping (what a party!). Yet, the delay of the bridegroom causes everybody to fall asleep. In life I experience the same: sometime the routine or the occupations of life make me “drowsy,” dull to the primary duty I have – to keep that lamp burning. I, too, fall asleep. As the song of songs says: “I sleep, but my heart keeps vigil.” The problem is not in falling asleep but ignoring my duty completely. The foolish and the wise have been asked to do the same thing and given the same opportunity: why the difference?
Wisdom is a great gift that God has given us. It allows us to see the world and think in a different, practical way. The maidens were wise because they remained focused on the task; the others were foolish because they assumed the Bridegroom would behave according to their expectations. They didn’t consider that he could be late. How wrong they were! how many times I also have some expectations of God: I want Him to behave in a certain way at a certain time. The problem is not here, I think; the problem is that I consider my way as the only way and therefore I get caught unprepared. Although I can still let Him know what I think, I must always keep my attention on what He is about to do. After all, it’s His party! It’s His Wedding. I am only one of the invited.
A Cry comes in the middle of the night, waking everybody up. Whose voice is it? Why don’t we know? Is it the Bride? I wouldn’t be surprised. Like the Bride in the Song of Songs, her heart would be vigilant, her eyes sharp to distinguish in the darkness of the night the shape  of her Beloved.
In the reality of His arrival, everything makes sense: our actions are revealed for what they are. Foolish or wise we will all react to His presence. Now the party can really start!!!!
This parable is about relating to the arrival of the Bridegroom and the fulfillment of the task given. That’s why the wise maidens do not respond as I think they ought to. They do not want to share what they have. Isn’t that… unchristian? In this case, they are doing the right thing. There are times in our lives when we cannot let anyone else do something for us, or we cannot share in the work of another. Our response to the task has to be fully personal. Nobody goes to heaven (to the party) by proxy. Nobody can be loving in my stead, or be good instead of me, or be honest. These are all things that I have to do on my own, for myself. The invitation I received to participate to the party was not shareable. It’s only for me. It’s a personal call, lived out communally. But it depends on my constant “Yes.”
I noticed something else in the foolish maidens. They leave to get some more oil. They come back and knock at the door. Once again they think the Bridegroom will behave according to their expectations, they still consider themselves as party of the wedding party. But the door is shut. They are left out.
It’s a tragic reality that sometimes I do not want to think about. Sometimes I don’t even want to talk about but it’s there, in the Gospel. Black and white. I have to keep watch of what I do and how I live my life – I don’t want to be left out of the party.
Then, I want to be vigilant. I want to be prepared for His arrival. How? If He’s the bridgegroom, then I will keep constant vigil, like mom used to do when I would come home late: she was up, waiting for me (even though she would pretend she was up for other reasons). He’s constantly coming to me. I have to keep my eyes sharp in order to find Him. Like when as a child I would play “hide and seek.”
I will find Him in every person I meet. I will love everyone because He is behind them; and I also learned that He hides in the “least of our brothers.”
If I choose to love, I will find Him. If I choose to love, I will be prepared. Love is the oil that will keep my lamp constantly burning until the day when I will be invited in the greatest party ever! I can’t wait!

If you are interested in learning more about joining The Catholic Church, please call the parish office at 410-289-0652 or fill our our contact form.